Urban unincorporated islands are unincorporated lands located within
a city’s Urban Service Area (USA) that have not yet been annexed into the surrounding city.  For over 30 years, the cities, Santa Clara County 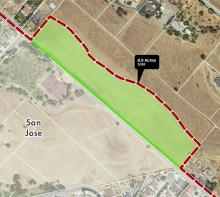 The LAFCO, County Surveyor, and County Planning Office have recently updated mapping of remaining unincorporated islands to reflect those annexations completed through April 2016. These maps were recently updated. The 2016 Island Atlas is now available below for the county.

In the last several years, the State of California has authorized streamlined procedures without protest hearings for annexation of islands that are 150 acres or smaller in size and that meet certain criteria. These provisions of state law were intended to sunset as of December 31, 2014. Assembly Bill 743, approved by the Governor and effective on January 1, 2014, eliminates the December 31, 2014 time limitation and makes the streamlined island annexation procedures permanent. Additionally, the bill makes islands that meet certain criteria and that are created prior to January 1, 2014, eligible for the streamlined annexation process.

The purpose of these streamlined island annexation provisions is to provide an opportunity for cities to programmatically pursue such annexations. In doing so, the state legislature and governor have recognized and supported the importance of island annexations to promote more logical jurisdictional boundaries, more efficient urban service delivery, and to provide more cohesive urban planning and neighborhood revitalization efforts for these urbanized areas.

A number of cities in Santa Clara County in recent years have employed these streamlined annexation laws to successfully annex most or all of their remaining islands, including, but not limited to Campbell, Cupertino, and Morgan Hill. Other cities have also made significant progress with annexations of some of their islands, such as Los Altos, Mountain View, San Jose, and Saratoga. [Note: certain cities have very minimal unincorporated islands or none at all. Others have significant islands over 150 acres]. In April 2006, the City of San Jose launched a three- to five-year annexation program targeting all islands of up to 150 acres that remain within its urban service area.

Assistance for Streamlined Annexation for Islands 150 Acres or Smaller

State law allows cities to annex certain islands of 150 acres or less without possible protest or election. In Santa Clara County, LAFCO is assisting cities with procedural and financial assistance to encourage cities to complete the annexation of eligible islands by that date. The County of Santa Clara is also providing funding for the costs of mapping, review, and associated fees, eliminating thousands of dollars of costs that would otherwise fall upon the residents and cities. The County is also offering to improve publicly maintained road surface conditions where appropriate, to bring them up to satisfactory surface standards upon annexation of the islands.

Annexation of Urban Islands is in the Overall Public Interest

The islands vary in size, condition, and socio-economic status. The issues and needs of each island vary also, ranging from lack of sewer service, neighborhood conditions, to land use issues. Individual property owners and residents also have diverse interests, and within a given island, there may be diversity of opinions about the prospect of annexation by their surrounding city. Those differences aside, the policies of the State of California, the 15 cities, the County of Santa Clara, and LAFCO concur that ultimate annexation of the islands is in the overall public interest countywide. The County encourages residents and other stakeholders to maintain a long-term, public-interest perspective in considering the annexation of the urban islands.