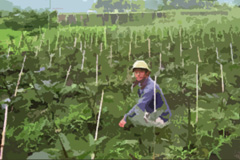 The Williamson Act (California Land Conservation Act of 1965: Government Code Section 51200 et. seq.) is a state agricultural land protection program in which local governments elect to participate. The intent of the program is to preserve agricultural lands by discouraging their premature and unnecessary conversion to urban uses.

Landowners may apply to contract with the County to voluntarily restrict their land to agricultural and compatible uses. Restrictions are enforced through a rolling 10 year term contract. Unless the landowner or the County files a notice of nonrenewal, the 10-year contract is automatically renewed at the beginning of each year. In return for the voluntary restriction, contracted parcels are assessed for property tax purposes at a rate consistent with their actual (agricultural) use, rather than potential market value.

More information on Williamson Act property valuation is available from the Office of the Assessor.

How does the Williamson Act restrict property use?
While restricted by a Williamson Act contract, the land cannot be used for any other purpose than the commercial production of agricultural commodities, and uses outlined in the contract's compatible use list. Any proposed uses and development must satisfy the compatibility principles outlined in County Ordinance Code Section C13-15 (State Government Code Section 51238.1).

What are commercial agricultural commodities?
Agricultural commodities are unprocessed products of farms, ranches, production nurseries and forests including fruits, nuts and vegetables, grains, legumes, animal feed and forage crops, rangeland and pasture for livestock production, seed crops, fiber and oilseed crops, nursery stock, trees grown for lumber and wood products, turf grown for sod, livestock for consumption such as cattle, sheep, and swine (except horses), and poultry, as defined in the Guideline for Commercial Agricultural Use. The boarding, training, or occasional sale of horses is not considered a commercial agriculture use or an agricultural commodity.

For questions regarding commercial agricultural use, contact the Division of Agriculture, Lori Olsen, at (408) 201-0643.

What is development?
Development includes erecting or placing structures or objects on the land, grading or otherwise altering the land for non-agricultural purposes, as defined in the Guideline for Compatible Use Development on Restricted Lands.

Can Williamson Act land be developed?
A land development application (use permit, subdivision, lot line adjustment, architectural and site approval, etc.) or building permit application may be filed after a favorable Williamson Act Compatible Use Determination has been issued. A residence may qualify as a compatible use on contracted property. Compatible Use Determination filing requirements are outlined in the application materials. A completed affidavit form (Declaration Regarding Agricultural Income on Williamson Act Property) must accompany the submitted documentation.

What if the Williamson Act contract was rescinded and the land is now restricted by an Open Space Easement Agreement?
The land is no longer required to be devoted to commercial agricultural production, but must be essentially unimproved land devoted to open space for the preservation of natural resources. Certain uses, such as a single-family residence may be determined to be presumptively compatible with the open space use of the land, but all use and development must comply with specific criteria. The applicable findings are outlined in the County Ordinance Code (Section C13-39) and Guideline for Policies Governing the Exchange of an Existing Williamson Act Contract for an Open Space Easement. Compliance with the open space easement agreement is evaluated in an application for a Compatible Use Determination, which must be obtained prior to the approval of any land development or building permit application. A Compatible Use Determination evaluates whether proposed uses and development are compatible with the open space use of the land, effectively preserve the natural or scenic character of the land, and do not impair the open space character of the land. This is an analytical process that involves balancing many factors and County development requirements, and is not limited to the calculation of development coverage on a parcel (maximum of 5%). Development proposals should maintain large, contiguous areas of open space and cluster development to the maximum extent possible, conserve the natural resources of the land, and minimize visual impacts and the need for grading and earthwork. For helpful design tips, consult the Open Space Easement Compatible Use Determination Development Handbook.

What if a Williamson Act property is developed without authorization?
A Williamson Act contract is an enforceable restriction. Failure to meet the conditions of the contract may be considered a breach of the contract. The Williamson Act Compatible Use Determination process is designed to protect landowners from a breach of contract. State law defines certain breaches of contract as "material breaches" and establishes a penalty of 25% of the fair market value of the incompatible structure and the land taken out of agricultural production. See requirements imposed by AB1492. Where the breach of the contract is a violation of land use restrictions or building requirements, normal zoning and building enforcement provisions will also apply.

How do I terminate a Williamson Act contract?
Under state law, the preferred method of contract termination is nonrenewal. Williamson Act contracts are terminated by filing a notice of non-renewal with the Office of the Clerk of the Board of Supervisors. The landowner must give the County written notice of his/her desire not to renew the contract by October 1 (at least 90 days prior to the January 1 renewal date.) The contract will then terminate nine (9) years from the January 1 renewal date following the notice of non-renewal.

Cancellation is an option under limited circumstances and conditions set forth in Government Code Sec. 51280. To grant tentative cancellation, the Board of Supervisors must make specific findings that are supported by substantial evidence to ensure the cancellation is consistent with the purposes of the Williamson Act. The owner's desire to use the property for another use or a more valuable use (other than agricultural use) is not sufficient justification for cancellation. In addition, the unprofitable nature of an existing agricultural use shall not, by itself, be a Guideline for General Administration, Monitoring and Enforcement of Williamson Act Contracts and Open Space Easement Agreement sufficient reason to cancel a contract.

To non-renew your Williamson Act contract or to obtain an application for contract cancellation, contact Stephanie Simunic​ at the Clerk of the Board of Supervisors, Williamson Act program, (408) 299-5091.

General contract compliance
Landowners are required to annually return a completed Agricultural Preserve Questionnaire to the Office of the County Assessor by April 10 for as long as the Williamson Act contract is in effect. Questionnaires returned after April 10 shall be subject to a late fee. Those properties for which a completed questionnaire is not returned may be subject to investigation by the Planning Office/Division of Agriculture, and/or non-renewal of the contract. The County also actively reviews all restricted lands on a regular basis to ensure contract compliance. See Guideline for General Administration, Monitoring and Enforcement of Williamson Act Contracts and Open Space Easement Agreement.

The Guideline for Commercial Agricultural Use defines the conditions and documentation by which commercial agricultural use must be demonstrated for the County's Williamson Act program. Consult the Guideline to determine the specific requirements for your parcel size (standard or substandard in size) and soil type (prime or non-prime land.)

Landowners of Williamson Act contracted parcels that are substandard in size (less than 10 acres prime land or 40 acres non-prime land) and have a documented history of being jointly used and managed for commercial agricultural production may elect to submit a joint management agreement. The Board of Supervisors approved a sample Joint Management Agreement that may be customized and used, in part, to document compliance with the Guideline for Commercial Agricultural Use. Please be advised that joint management agreements are designed for use in general Williamson Act contract compliance and are typically not useful when compatible use development is proposed on an individual substandard sized parcel. This is because the parcel proposed for compatible use development will be evaluated as a substandard size parcel for its own capacity to sustain commercial agricultural production, rather than collectively (total land in joint management agreement) as a standard sized property.